‘In my possession is a tattered, yellowed booklet, the text is twenty-one pages long, written in 1961 by Phra Tepsiddhimuni (then Phra Rajsiddhimuni). The commendable English translation by Thai volunteers in 1964 is entitled ‘Manual for Checking Your Vipassana Kammathana Progress’. Kammathana in Pali means ‘place of work’. Here, it refers to the insight knowledges as stages of development or ‘places’ within the mind.

From Chapter 9 – 'The Meditation Teacher for all of Thailand'

Phra Dhamma Theerarach Mahamuni Meditation Teacher for all of Thailand

'Phra [Tepsiddhimuni, as he was known during my time there] was an important Pali scholar who in the 1950s was chosen to attend the two-years-long Sixth Buddhist Council in Burma on behalf of Wat Mahadhatu. The official purpose of this Sixth Council in 2500 years was to confirm the texts and practices of the Theravada…

The unofficial purpose was to introduce the Vipassana meditation technique to the world that the Mahasi Sayadaw, the Burmese monk who organised the council, learned from his teacher and had developed further. Any such method needed canonical support which was the Council’s job to scrutinise. A Council’s official endorsement is the bottom line in Theravada for acceptability. Phra Tep returned to Thailand to report to his superiors that through personal experience the method did indeed work and was validated by canonical analysis.

Phra Tepsiddhimuni’s name changed several times throughout his life according to his advancing formal rank in the Thai clergy. His final name was Phra Dhamma Theerarach Mahamuni. His royally bestowed title of ‘The Meditation Teacher for all of Thailand’ remained constant.

Here was another firebrand whom it was hard to keep up with when he walked, but I did. It was especially challenging in crowds which he could flit through with ease because of his size. Patient with all and approachable, always enthusiastic in his teaching, he was an exemplary monk on every level. The Thai people adored him.'

From Chapter 8 – 'The Dragon in Bangkok'

'For fun, I eventually took to calling Wat Mahadhatu “Vatican City-Bangkok,” due to its political significance as the traditional seat of the Thai national religion. It sits across from the Royal Palace, but the tourists never see it, although they can. For centuries, its abbots have been the Sangharajs, ‘Supreme Patriarchs’ in English, who are to Thai national church politics what the Popes in Rome are to Catholic government.

That was until King Rama the Fourth gave the honour to another temple during his reign 150 years ago. Imagine the furore. Now the Sangharaj comes from one then the other in tandem. It was Wat Mahadhatu’s turn at the time.'

From Theory and Practice C – 'The Insight Knowledges'

'[S]tudents are kept in the dark about their advancements through the stages. In his book ‘Practical Insight Meditation’, the Mahasi Sayadaw wrote: ‘It is not good for a pupil who meditates under the guidance of a teacher to get acquainted with these stages before meditation begins.’

However, he did state in the conclusion of ‘The Progress of Insight’: ‘Though in the beginning it was mentioned that this treatise has been written for those who have already obtained distinctive results in their practice, others may perhaps read it with advantage, too.’

Okay, you’ve been warned. If you [download the booklet], consider yourself to be a consenting adult.'

Although the download requires an email address, you will never be contacted. There are no strings attached. Enjoy it and I hope that you buy the book as well for more complete information.

Yours in Truth, Alex 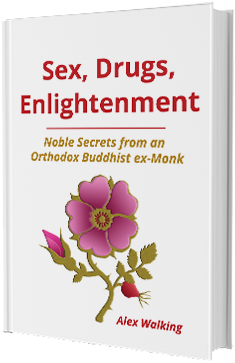 Whatever your deepest question is, its answer is in this book!